Vitamin C, also called ascorbic acid, is the most popular dietary supplement in the world, taken by more people than any other vitamin, mineral, or herbal product. Two-time Nobel Prize-winning biochemist Linus Pauling spent a great deal of his life researching the benefits of it. He believed that a deficiency of this was the main cause of cardiovascular disease and that it could cure a variety of ailments ranging from the cold to cancer. While the health benefits are still somewhat controversial, many people swear by their daily dose of this water-soluble vitamin, which performs a range of functions in the body from manufacturing collagen to being a powerful antioxidant.

Ever since Nobel laureate Linus Pauling wrote Vitamin C and the Common Cold in 1970, many people have braced themselves for winter by taking large doses of ascorbic acid. Pauling, a molecular chemist, also believed that loading up on it—up to 18 grams a day—might prevent cancer and other diseases. Some athletes take supplements in the belief that it increases aerobic power and endurance. 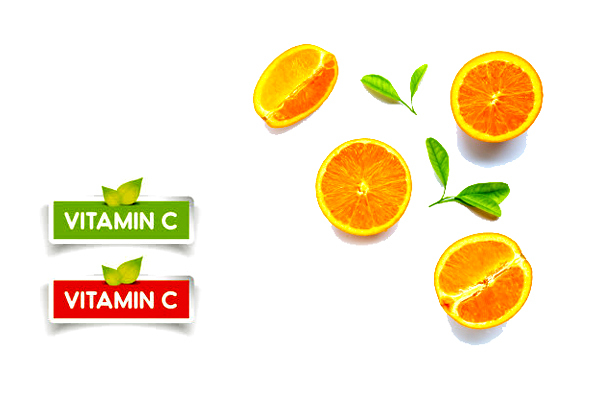 It seems to come in so many forms—how do you distinguish between various products? You may see a variety of vitamin C combination products on the shelf at your local pharmacy, health store or online. Since all of these forms are high in C, you can choose a product that perfectly suits your particular preferences. Read on for a guide to help clear up some of the confusion.

Vitamin C is often sold with bioflavonoids, which are antioxidant compounds derived from the rinds and pulp of lemons, oranges, and grapefruit. Flavonoids enhance the action and improve the body’s absorption of this important nutrient. The perfect blend should have a 1:1 ratio of vitamin to flavonoids (for example, 100 milligrams of vitamin C to 100 milligrams of bioflavonoids).

This form is derived from the acerola fruit, one of the richest sources. Acerola also contains flavonoids and other vitamins, including thiamine, riboflavin, niacin, pantothenic acid, and beta carotene, and minerals such as magnesium and potassium.

Rose hips are the fruit of the rose, which remains on the bush after the petals of the flower have fallen off. They have a high content of vitamin C, and rose hips from one species, Rosa rugosa, have the highest content of any natural source in the world! Aside from their vitamin C content, rose hips contain various carotenoids, flavonoids, catechins, polyphenols, and pectins.

This buffered form is a combination of ascorbic acid (50 %) and sodium ascorbate and is often suggested for someone who have sensitive stomachs or ulcers.

Perhaps the well-known member of this category is Ester-C, a readily absorbed chemical derivative of vitamin C. Metabolites are compounds produced by the body from nutrients, but which can also be created synthetically. Research shows that several metabolites are well absorbed and retained in the body.

It is probably the greatest defence against the common cold. A number of surveys have shown that while it may not prevent colds, taking it on a regular basis reduces the duration of colds when they do occur, as well as easing the symptoms that accompany colds. Thus, in most cases, taking it when a cold starts will probably not work as effectively as taking the vitamin on a regular basis.

However, studies do show that people who have a deficiency, as well as those who experience exercise-endurance-related vitamin C may be one of the most powerful antioxidants in living nature and can protect the body from the cell and muscle damage caused by free radical molecules.

It works together with various enzymes in the manufacture of collagen, an important protein in connective tissue such as tendons and ligaments, as well as in skin and blood vessels. This is why it is often recommended to help treat wounds and is the main ingredient in many skin-care products and supplements.

Early research suggests that creams containing vitamin C may help improve the overall quality of ageing skin and reduce skin damage caused by the sun. And for someone who tends to bruise easily—especially those with a deficiency of this nutrient—it may reduce the tendency to bruise. Because of its role in producing the connective tissue for ten-dons and ligaments, it is also suggested for conditions that damage these structures, such as bursitis and tendonitis.

It may also help prevent the buildup of atherosclerotic plaque in the arteries. If you are with low levels of vitamin C may be at greater risk for heart attack, stroke, and peripheral artery disease. When taken in conjunction with vitamin E, it may keep LDL (“bad”) cholesterol from oxidizing, although it indicates that it may also have this same effect when taken alone. Some studies have suggested that it may also reduce blood levels of total cholesterol, although this requires more analysis.

It is widely hailed as a treatment for cancer, but this is highly controversial. While some surveys show that some people with cancer may benefit from high doses of vitamin C (for example 10,000 milligrams daily) in terms of surviving for longer periods, other studies do not find any benefits of this vitamin in cancer patients. Some population-based studies have shown that patients whose diet are rich in vitamin C are less likely to develop cancer. Further, a review is required to ascertain the connection between vitamin C and cancer prevention and treatment.

Small testing has shown that it may have a modest blood pressure-lowering effect. One double-blind study conducted of patients taking hypertension medication showed that they had a 10 % reduction in hypertension when they were also given vitamin C. Other population-based survey have shown that people who consume a diet rich in antioxidants, including vitamin C, are less prone to develop it than those who do not have such a diet.

Many investigations show someone taking nitrate drugs (often prescribed for angina) may benefit from vitamin C supplementation. Since this has been found to increase the effectiveness of nitrate medications over time when it would otherwise tend to diminish.

It may also aid the body in its detoxification of heavy metals, including mercury, lead, cadmium, and nickel. It also has numerous other potential uses, including the prevention of cataracts, glaucoma, cervical dysplasia, pre-eclampsia, gum disease, gallstones, and Alzheimer’s disease, and the prevention and treatment of constipation, sexual dysfunction, infertility, herpes simplex, human immunodeficiency virus (HIV), lupus, and of asthma and allergy symptoms; however, further research is needed to verify its benefit for these uses.

Also, one of the main reasons we take these supplements is to boost their immune system and increase performance in sports.

While animals can synthesize their own vitamin C, the human body cannot make or store it on its own, for which reason it is important to eat foods that contain plenty of this vitamin and to take supplements as well. Although it may be synonymous with citrus-derived products, it can be found in more foods than orange juice. Because vitamin C is sensitive to light, heat, and air, its health benefits are strongest when it is consumed in fruits and vegetables that are eaten raw or lightly cooked. Read on for the best food sources of it.

It protects fat-soluble vitamins (such as A and E) from oxidation. It also strengthens connective nerves by producing collagen. It works within the cells to provide hydrogen and oxygen to the amino acids lysine and proline—a process that helps to form procollagen, a substance that is later turned into collagen. As an antioxidant, vitamin C “rounds up” and destroys free radicals before they have a chance to harm the body. It may also reduce the effect of many heavy metals (such as lead) in the body, perhaps by stimulating enzymes in the liver that aid in detoxifying these metals.

In terms of cardiovascular health, It not only protects nerves from cell- and tissue-damaging free radical molecules but also helps the body metabolize fat. As noted earlier, vitamin C may also prevent the buildup of plaque in blood vessels by curbing LDL (“bad”) cholesterol. In addition, vitamin C may combat plaque build-up by preventing platelets from gathering on blood vessel walls and forming blood clots. So our immune system depends to a significant extent on the intake of C vitamin.

See the picture of the table below for the recommended daily intakes (RDIs) of vitamin C. Note: Smokers in all of the groups in this table should increase their intake by a minimum of 35 milligrams since smoking depletes the body of vitamin C. 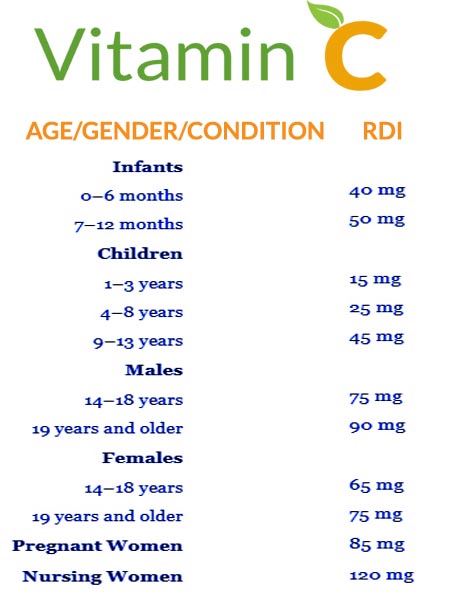 Researchers have studied this very thoroughly and it is well established that higher dosages can be beneficial. An expert panel recently called for increasing the (RDA) as a result of current scientific research. The National Institutes of Health (NIH) recommends a dosage of 100 to 200 milligrams daily for healthy adults.

It should be taken in several small doses throughout the day in order to achieve optimal absorption. While scurvy—a condition caused by vitamin C deficiency and characterized by weakness, anaemia, bruising, bleeding gums, and loose teeth—is extremely rare in the developed world. It is commercially available in a number of forms, including tablets and capsules, and in chewable form. It also comes in powdered crystalline, effervescent (which is a combination of ascorbic acid and sodium bicarbonate), and liquid forms.

Note that because of its high acid content, chewable tablets can erode tooth enamel. If regular ascorbic acid upsets your stomach, you can get in a buffered form, which is usually better tolerated.

Vitamin C is generally considered safe, even at relatively high doses, since most of any excess taken as a supplement is excreted through the urine. Extremely high doses can occasionally lead to stomach cramps, nausea, and diarrhoea. It increases the amount of iron absorption from food. People with hemochromatosis, a condition marked by excess iron in the body’s tissues, should consult their doctor before taking it. Also, consult your doctor before taking vitamin C with warfarin.